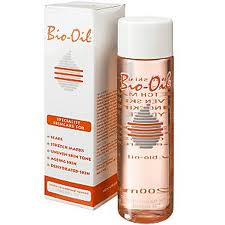 Most of us look for permanent solutions to stretch marks, scars, acne, uneven skin tones and aging. Bio oil promises us answers.

To say that I have tried this product and not seen good results would be lying. Yet, I have seen the same results (if not better) with 100% Pure Unrefined (Grade A, Fairtrade certified) Shea butter.

Here’s the deal…if you are looking for a drive through breakthrough, Bio oil works. At least it did for me.

However, you might want to consider the long-term side effects; which could be negative.

The Environmental Working Group Skin Deep Database rates Bio oil at a 7 (High Hazard). Furthermore, there is limited scientific research available on this product, which raises the issue of caution when considering it. Lastly, they are non-signers of the Compact for Safe cosmetics. Please click on this link for more info.

The aim of this site is not to run down mainstream cosmetic companies but rather push them to use safer ingredients.

Mineral oil is a petrochemical derivative that is harmful to the skin. Putting mineral oil on your skin is like wrapping it in plastic wrap. The skin is not able to absorb nutrients and it can't detoxify, which renders beneficial ingredients ineffective and results in premature aging.  (2)

So much for Bio oils claim with helping to combat aging…

The company maintains that it uses a “breakthrough ingredient” known as PurCellin oil. As it turns out, this oil is derived from ducks. It is the substance ducks secrete from their skin to keep their feathers waterproof. (1)

I have found no research proving the effects of Purcellin Oil for treatment of skin concerns that Bio-Oil is promoting. Moreover, PurCellin oil isn’t even included on Bio-Oils ingredient list on both their product package or their website.

Isopropyl myristate is found in many everyday beauty products and is generally considered safe for consumer use. Despite its popularity with manufacturers, some side effects have been reported such as skin irritations, clogged pores and acne inflammation. It is generally safe, although those with sensitive skin conditions may wish to avoid products containing this ingredient.(8)

BHT According to the National Library of Medicine HazMap, BHT is considered to be a "known immune system toxicant." Animal studies have also shown that in low doses, BHT causes negative effects to the brain and nervous system. This study was published by the Journal of Medicinal Chemistry in 1980 and has yet to be refuted. There are a host of bans and restrictions on BHT across the globe, yet it is still used here. (4)

Parfum There is no “right to know” for fragranced products:  Ingredients in fragrances are considered to be “confidential business information” and  “trade secrets” and do not have to be revealed to the consumer even when the product has been reported to cause human health problems.  Clearly the self-regulatory process for fragranced products is seriously flawed.  At best it is inadequate and at worst dangerously misleading.  (5)

Fragrances are used daily in personal care, household and cleaning products by millions of people and while most may believe they are using safe products the truth is that the actual safety of fragranced products remains uncertain and largely untested (5)

Amyl Cinnamal This highly allergenic fragrance ingredient is an alcohol, even though the label doesn't say "amyl cinnamal alcohol" as it should. Also, it is a known toxicant to the immune system in humans. (4)

Benzyl Salicylate UV absorber. Does have salicylic acid as a component, which is not to be used by pregnant women. (4)

Coumarin According to the Federal Institute for Risk Assessment, the popular lavender scented ingredient coumarin may pose a significant health risk and should not be added to personal care products for babies and toddlers. Coumarin is on the EU's list of banned and/or restricted ingredients (3)

It is found in this product as a fragrance ingredient.

Eugenol is a denaturant and fragrance component. It is highly toxic and also on the EU's banned/restricted list. The National Library of Medicine HazMap calls this a "known human immune system toxicant." (4)

Geraniol Masking fragrance, toning agent. Known to be a strong toxin; banned or restricted in other countries; a known environmental toxin (4)

Hydroxycitronellal Yet another masking fragrance! A known immune system toxicant; also banned or restricted in the EU and other areas (4)

Limonene skin sensitizer; for perfume. Restricted/banned in other countries (4)

Linalool Masking fragrance; shown to be hazardous, banned/restricted for use in other countries (4)

Alpha-Isomethyl Ionone The International Fragrance Association (IFRA) banned the ingredient from being mixed into fragrance products (i.e. perfume, cologne). Interestingly you can still find this ingredient in a variety of other cosmetics that are not categorized as a “fragrance.” (6)

CI 26100 Characterized as a possible carcinogen (7)

Solving a problem with methods that only create more problems should never be an option. (2)

Back to Natural Skin Care